Tuist has support for caching a pre-compiled version of your project targets locally and remotely. When targets are cached, developers can generate projects where the targets they don't plan to work on are replaced with their pre-compiled version. In modular apps, this feature yields significant improvements in build times.

Unlike Bazel or Buck that replace Xcode's build system to cache individual build steps, we do caching at the module level. That means developers can use Xcode and its build system and don't have to develop tooling around alternative build systems to integrate them with developers tooling. 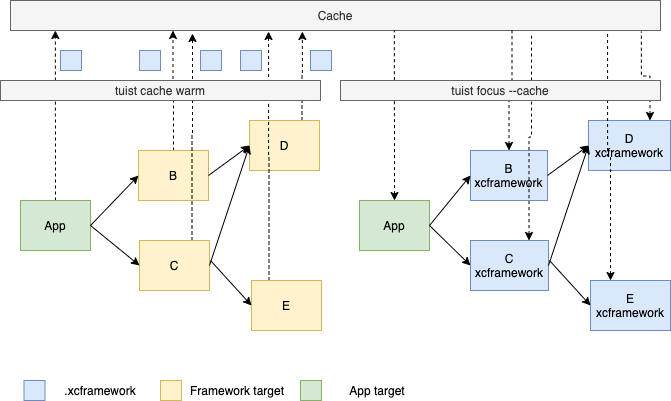 Warming the cache is the process of building, hashing, and storing cacheable targets in the cache. We recommend setting up a continuous integration pipeline that runs on every master commit and executes the following command:

To warm the cache of only specific targets and their dependencies, you can run:

One the cache is warmed, you can use the focus command to generate a project replacing direct and transitive dependencies with artifacts from the cache.

You can change the cache directory in Config.swift, for example:

Targets are uniquely identified in the cache. The identifier (hash) is obtained by hashing the attributes of the target, its project, the environment (e.g. Tuist version) and the hashes of its dependencies. To facilitate debugging, Tuist exposes a command that prints the hash of every target of the dependency tree: